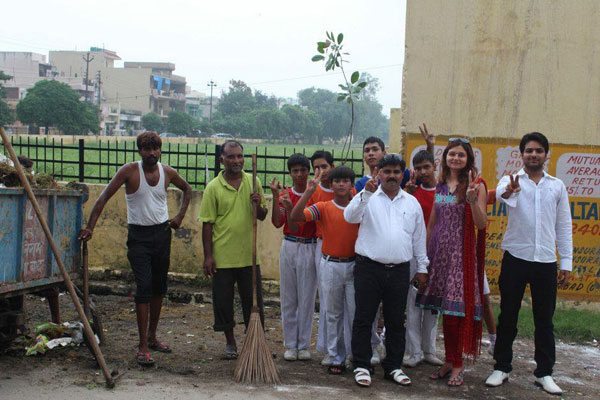 “To take a big step, one needs a small step in the beginning.”
On 2nd October 2014, PM Modi ji launched the “Swachh Bharat Abhiyan” and asked citizens to take photos of garbage, upload them on social media, upload videos of them cleaning the spot, and finally upload a picture of the clean spot. The emphasis has been on non-littering as My Clean is all about attitude. Littering is a lifestyle disorder and reflection of a poor attitude of the people of the place. Do you know why there is a ‘My’ in ‘My Clean India’? PM is right in saying that a clean India will give us as much joy as the Quit India campaign as My Clean India is about us, you and I, about not pointing the fingers at others.

csDishaa has been working on this since 2007. According to Dr. Udita Tyagi whenever the volunteers asked the people about the weste their fingers would come out - fingers pointing towards other people, towards Nagar Palika, toworads the Gov. etc. Hence in order to promote cleanliness ‘My Clean India’ was progressively launched and as many as twenty places like Agra, Ajmer, Almora, Allahabad, Lucknow, Ghaziabad etc have been in action. Nainital stood out, not only did it start MCI but it didn’t stop. They launched a cleanup day, people took action and created Mission Butterfly as a remarkable, community-owned waste management program.

Will you the people of India, take on this challenge promoted by our Prime Minister to create a Clean India?

My Clean India can become an inspiration for the world. India is an amazing country and in many respects a model nation for the world. Cleanliness is not just about litter, it is about attitude and every country is eligible to look into its own attitude of what is “clean”.

Prime Minister Modi launched the “Swachh Bharat Abhiyan” campaign to aim to make India ‘clean’ in just five years. He went on to say that “Bapu gave us the message ‘Quit India. Clean India’, but his ‘Clean India’ dream is still unfulfilled,” Dr. Udita Tyagi says ,“ I am confident that Clean India will give us as much joy as Quit India”. Yes to that! The flame was lit ten years ago by the csDishaa Foundation.

‘INDIA CAN CHANGE’. It is not just a thought but a dream put into action by csdishaa Foundation. It is the motto of everyone connected with it. It’s a lifestyle change. My Clean India campaign has started changing people traditional mindset. It is just a sample of change that we have been witnessing in various cities across India. There is a lot more to change.

Hence “Come, Join us and Make India a Clean & Green Country to Live In”.

Why We Do IT